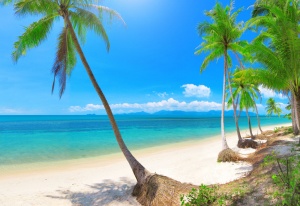 Koh Samui (or Ko Samui, Thai: เกาะสมุย) is an island off the east coast of the Kra Isthmus, Thailand.

Geographically in the Chumphon Archipelago, it is part of Surat Thani Province, though as of 2012, Koh Samui was granted Municipality status and thus is now locally self-governing. Koh Samui is Thailand’s second-largest island after Phuket, with an area of 228.7 km2, a population of over 63,000 and a hotel occupancy rate of 73 percent as the number of visitors increases. Abundant tourist resources, wide range of restaurants & accommodation, sandy beaches, coral reefs, and coconut trees are present on the island.

The island was probably first inhabited about 15 centuries ago, settled by fishermen from the Malay Peninsula and southern China. It appears on Chinese maps dating back to 1687, under the name Pulo Cornam. The name samui is mysterious in itself. Perhaps it is an extension of the name of one of the native trees, mui. Some people believe that the word “samui” derives from the Malay word “saboey”, or “safe haven”, although there appears to be no credible corroboration of this. Koh is the Thai word for “island”.

Until the late-20th century, Koh Samui was an isolated self-sufficient community, having little connection with the mainland of Thailand. The island was without roads until the early 1970s, and the 15 km journey from one side of the island to the other could involve a whole-day trek through the mountainous central jungles.

Koh Samui’s economy now is based primarily on a successful tourist industry, as well as exports of coconut and rubber. Economic growth has brought not only prosperity, but also major changes to the island’s environment and culture.

Koh Samui features a tropical savanna climate under Köppen’s climate classification. The island has only has one true dry season month, with the average monthly precipitation in February falling below 60 mm (2 in), the threshold for a tropical dry season month. The climate is warm and humid for most of the year. However, in comparison to Phuket and most of the rest of southern Thailand, Samui’s weather is relatively drier (Samui receives about 1,960 mm rain per year, Phuket 2,220 mm (87 in), while Phuket’s Wet Season is spread over 6–8 months, Koh Samui’s has only two months with more than 212 mm (8 in) of rain). The heaviest precipitation is typically seen in the months of October and November. For the rest of the year, given the tropical climate, rain showers are brief; 20–60 minutes duration is typical.

Koh Samui is in the Gulf of Thailand, about 35 km northeast of Surat Thani town (9°N, 100°E). It is the most significant island in the Chumphon Archipelago. The island measures some 25 km at its widest point. To the north are the populated resort islands of Koh Phangan, Koh Tao, and Koh Nang Yuan. Close to Bangrak in NE Samui is the small uninhabited island of Koh Som, and to the northeast of Chaweng is the tiny Koh Matlang. In the southern direction are Koh Taen, Koh Matsum each of which have very small tourist facilities. To the far west are 44 other islands which together compose the Mu Koh Ang Thong National Park which is accessible by a day-trip boat tour from Koh Samui.

Bang Por Beach and Maenam Beach occupy the north coast of Samui along with Bophut and it’s famous Fisherman’s Village.

The central part of Koh Samui is the mostly unspoiled, natural tropical jungle, including the largest mountain named Khao Pom, peaking at 635 meters. The various lowland and coastal areas are connected by Route 4169, which is a 51 km road, running primarily along the coastline and encircling the bulk of the island. Many other concrete roads branch off from 4169 to service other areas.

On the west coast of the island is the original capital, Nathon, which still houses many government offices, as well as two of the island’s five major piers. Nathon is the major port for vehicular and goods transportation from the mainland; it is the centre of the fishing industry, though the seat of the regional government has been relocated further south. Nathon is the home of the public hospital. Being the location of the main port and the closest inhabited area to the mainland provided the impetus for Nathon becoming the commercial center for Samui locals. More recently, the transition from dependence on the local coconut industry along with the continued growth and development of the tourist industry, as well as the northeastern location of the airport, has led to the increase of commercial activity in Chaweng and Bophut.